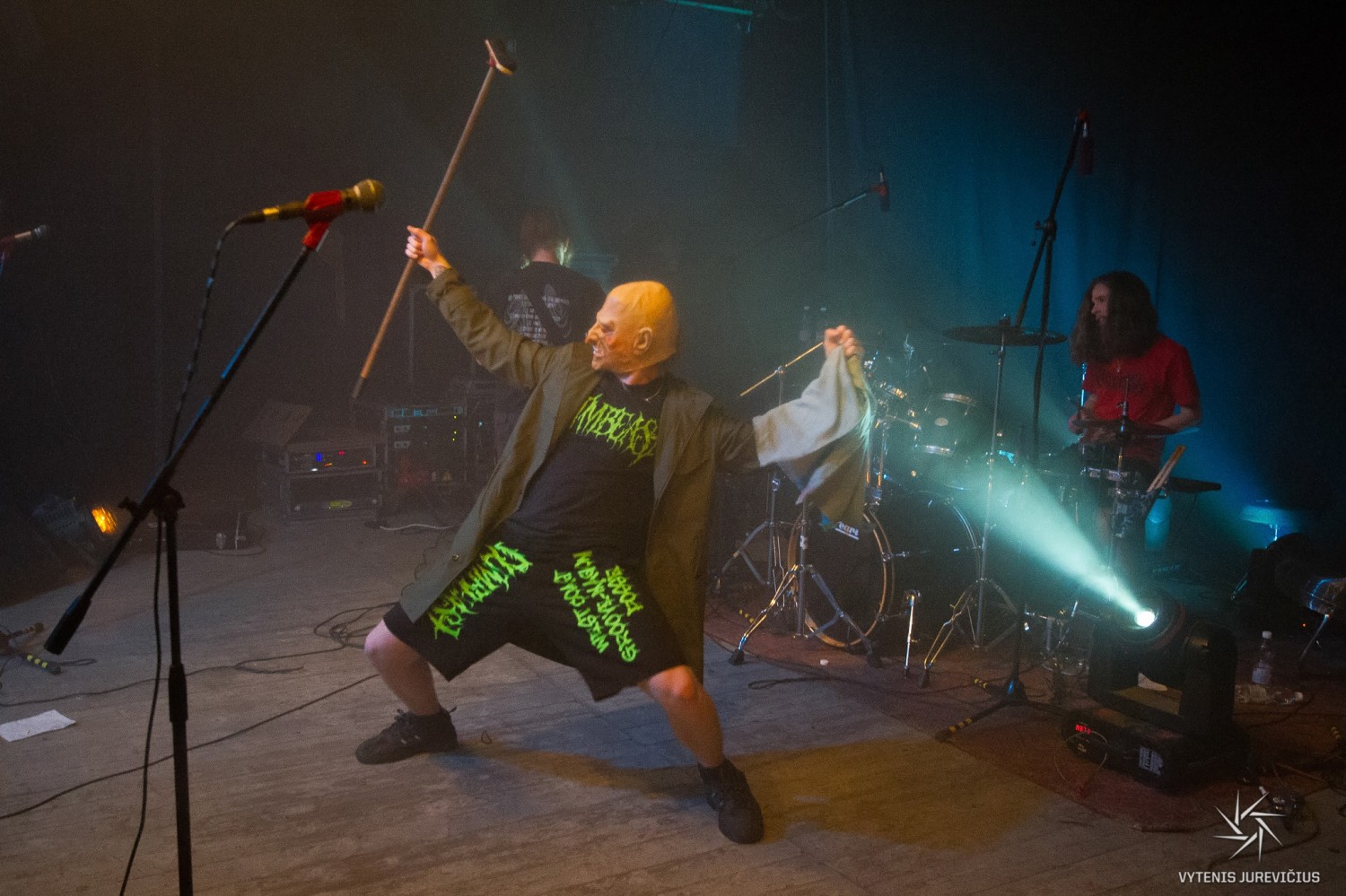 Photos by Vytenis Jurevičius. More photos from the concert – here >>

On February 4th the grand and grinding “In‘Feast Vol. I” ravaged Vilnius. I‘m pretty sure, though, that this honourable mission wouldn‘t have been completed without the great guerrillaz of sickness from Finland – CUMBEAST. Their groovy brutal death metal deliverance surely rescued some moshing and headbanging souls in the capital of Lithuania.

Before the show I sat down with all three of the cumbeastie boys (Iiro – vocals & bass, Mikko – drums, Roope – guitars & backing vocals) for an interview and, as it seems afterwards, tormented them with quite a few questions. But, believe me, it was a lot of fun.

I‘ve read about the big change in CUMBEAST‘s line-up – your guitarist/2nd vocalist Jake has left the band. You‘ve played two shows now in Tallinn and Riga without him. How is it going without Jake so far?

Iiro: Oh, it has been good (laughs). He had a big impact on this band, as one can suspect, because he was the only founding member remaining in CUMBEAST. But I think we manage to play as a trio pretty good. I do almost all the vocals now, Rob sings in one song and does backing vocals, maybe he will do some more backing vocals in the future as well but it‘s going good as a trio and we don‘t have any plans to get another guitarist in the future. It‘s different for me especially because I have to sing a lot more so I don‘t have time to just play and focus and be stupid all the time.

You wrote that Jake had written about 90% of all CUMBEAST‘s music and lyrics. So who‘s that 10% remaining to write new material for the future CUMBEAST?

Iiro: Yeah, really, let‘s see where these 10% will go (everybody‘s laughing). Maybe it won‘t take like ten years to write one song. I think it will be good, because we have always counted on Jake to do everything: all the vocals, lyrics and song-writing. Now that Jake isn’t in our band anymore we just have to do it, there’s no option anymore. I don’t think there will be any problems because all of us have played in so many bands and played with CUMBEAST for so many years so we know pretty much what to do. The new songs will, of course, sound a bit different but we’ll see what happens.

I’ve always liked stories in which musicians tell how they first got into music and their instrument. How did you find your own passion for music and instruments that you play?

Roope: I played ice-hockey when I was young and my second coach was a guitar player. He knew that I was listening to a lot of heavy music and punk rock so one day he asked me if I would like to start playing a guitar. I was like: “Sure, why not?” and then he got me a guitar. That’s how I…

Mikko: I think I was about twelve when I started playing drums. I used to play football but our team ceased to exist so I had to stop. I didn’t want to search for another team so I kind of needed to get another hobby. I tried playing drums and never looked back since then, I guess.

Iiro: When I was in my teams… ha, teams… in my teens I started listening to heavier metal music and when we were maybe fifteen or sixteen we had an idea about forming a band. At first I was only a vocalist, just trying it out, but we couldn’t find a bassist so I had to learn how to play bass. I’m still trying to learn that (laughs). That’s pretty much it, nothing special. It was nearly fifteen years ago.

Yeah, but I think your way of playing bass is a very special ingredient in CUMBEAST’s music. I mean, of course, slap bass that really stands out. How did you discover this bass playing technique? 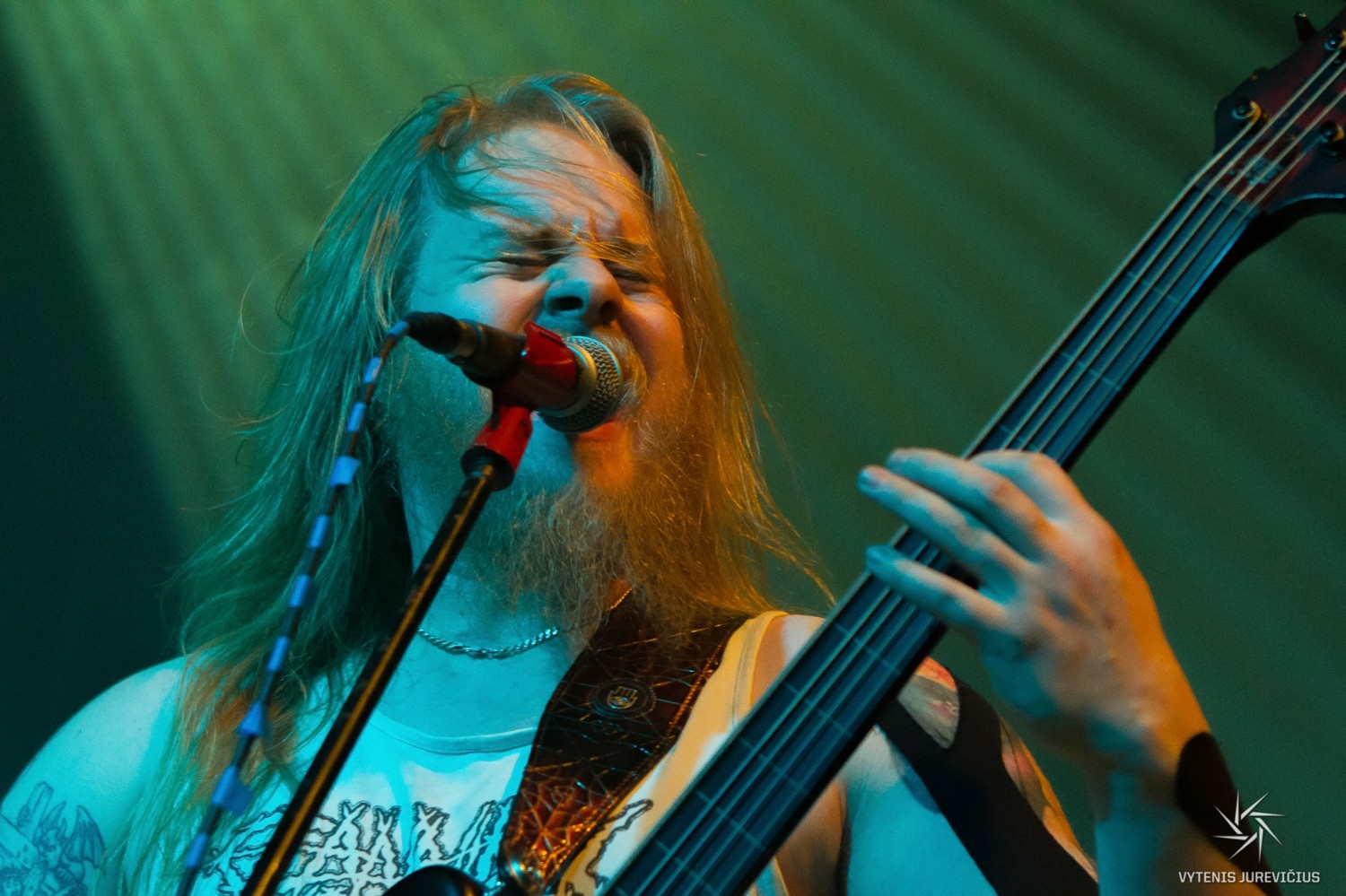 Iiro: When I was young and had more time and interest to practice the bass playing I tried to learn different things musically, some slap bass, some funky stuff and all that. Most of the times when I played in bands I didn’t quite have the possibility to play slap bass. I played regular death metal where there’s not so much room for special things for bass. But as for CUMBEAST, it is totally different because we always have this groovy aspect. Of course, my custom fretless bass contributes a lot to our sound.

Mikko: I think the greatest difference for me is that I actually enjoy playing in CUMBEAST (laughs). At the time I liked playing black metal but then I kind of got thrown out of this. But it is quite different, the songs are so different. In black metal I just had to play blast beats and double bass drum. There’s so much more to this kind of music that we play in CUMBEAST. I like to play this groovy stuff a lot more.

And Roope, do you still play in a melodic death metal band?

Roope: No, not anymore. But I have a punk band now, it’s called LAST TO EXIST. We play like melodic hardcore punk stuff. But I guess you were asking about my former band SORTOKAUSI?

Yes, I wanted to ask which was more challenging for you as a guitar player – to play in CUMBEAST or in SORTOKAUSI? 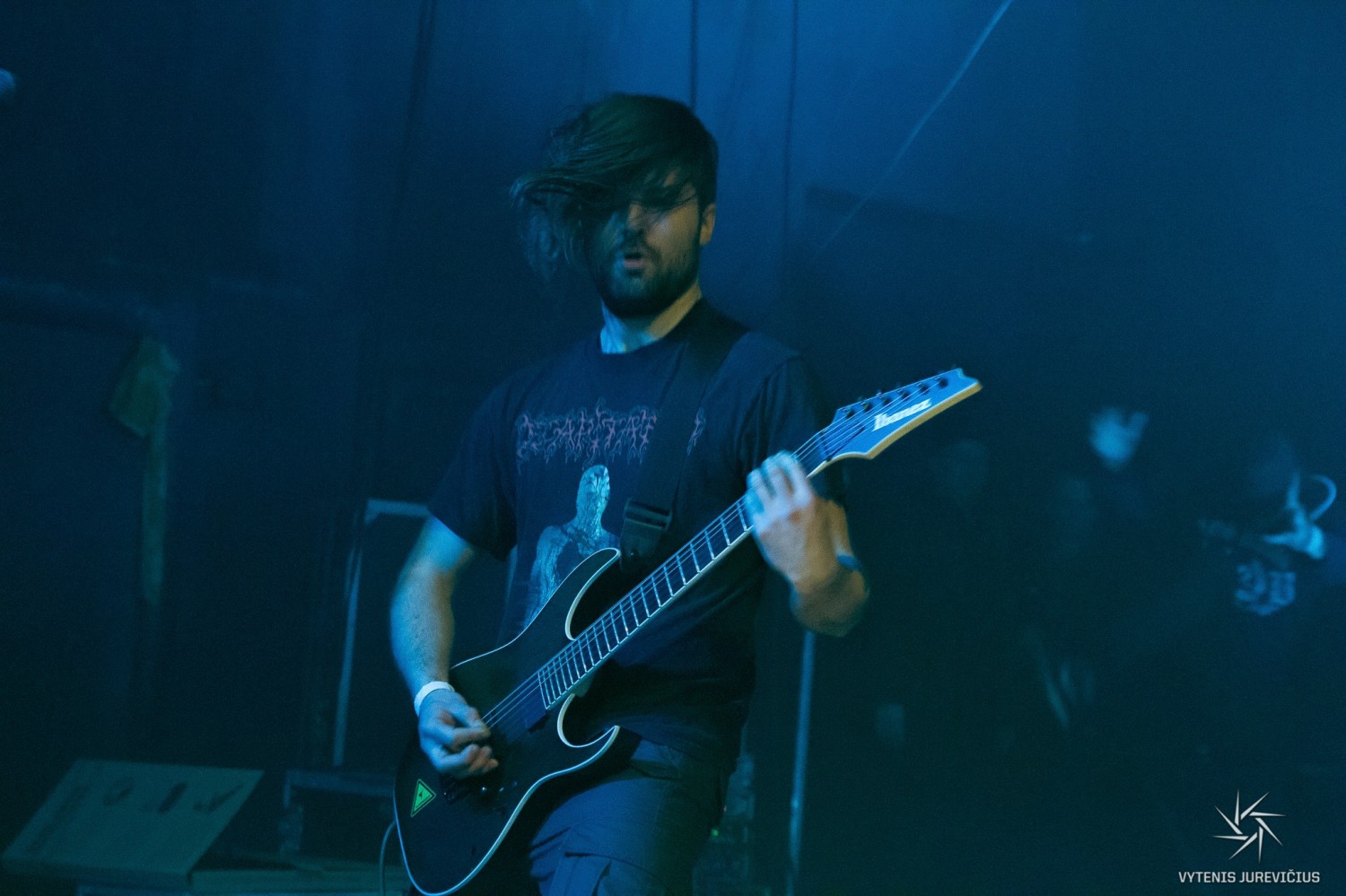 Roope: CUMBEAST’s music is groovier and more technical. The guitar tuning is also different so it’s a bit more challenging to play in CUMBEAST. But I got used to that so it’s working fine for me.

I know that you include many styles in your music but I want to ask about your death metal influences in particular, they really don‘t sound like coming from the neighbouring Sweden.

Iiro: We should actually talk to Jake, who isn’t here now, about that. We take some influences from modern death metal, brutal death metal, slamming death metal. Pretty much all the bands we come across during our gigs also have some influence on us, we always find new bands to listen to. Considering the older stuff, we have been talking about this with Jake, such bands like MORBID ANGEL, CANNIBAL CORPSE and especially SUFFOCATION and DYING FETUS had a huge impact on CUMBEAST’s music. We don’t have any influences from Swedish death metal, especially not from the old-schoolish one, because we’re not HM-2 Heavy Metal pedal guys, we are doing our stuff – not the melodic, so-called “evil” death metal.

When I‘ve read in your interview with In‘Feast organizers that hip-hop had not had such a big impact on your music I was a bit surprised. Actually, after listening to CUMBEAST‘s discography I thought: “Dammit, it‘s ANTHRAX of brutal death metal!” And isn‘t the title of your latest album – Straight Outta Sewer – taken from the song Straight Out the Sewer of an American hip-hop band DAS EFX?

Iiro: Wow, I didn‘t even know that (laughs)! We have stolen someone‘s great name for our own album! But that‘s what we do all the time! As for the hip-hop influences, we don‘t listen much to hip-hop, but we try to push the general limits a bit further so that‘s why in every album we had a nearly clean rap part in one or some songs. Talking about my vocals, they are a bit like death rap, if you listen, for instance, to vocals in DYING FETUS, they sound a bit rap as well, because they are so rhythmical. There‘s some groove in the vocals, it‘s not only (Iiro demonstrating some guttural dullness) all the time but there are actually some rhythmical aspects in it. And exactly this aspect in our band should have been taken from hip-hop even though we don‘t listen to it that much.

And I guess the recurrent phrase in all four CUMBEAST‘s albums is mutthafukka?

Iiro: Yes, it is! Mutthafukka!

I‘ve noticed that your first three albums were released by a Spanish label but for Straight Outta Sewer you moved to a German label.

Iiro: All the respect to Fernando from Pathologically Explicit Recordings on which we have released our first three albums, he did a great job, but we wanted to have a German label which was a bit bigger. Marco in Rotten Roll Rex records, he works actively with gigs – he goes to gigs and festivals that take place in central Europe, Germany, Netherlands and other countries, in which the market is more favourable for music. He was in many festivals we were playing at, so we had met him before. We‘ve toured in Germany, Netherlands and Belgium and we‘ve received a lot of positive feedback in these places so we benefit a lot more when the label is German. Marco also has contacts with other people from these areas, probably more than Fernando did. Moreover, we have always worked only with Fernando so we wanted to switch the label in order to try something new.

But why didn‘t you search for a Finnish label?

Iiro: Because there‘s no brutal death metal scene in Finland in general. We are pretty much the only active brutal death metal band in Finland so there is no point in having a Finnish label. It‘s useless. Every time we go outside of Finland there‘s like ten times more people coming to our shows and they actually know our music. But when we play in Finland – no one knows and no one cares. We play many shows in Finland, of course, but it‘s always different. We get a lot better experiences outside of Finland and that is why we definitely wanted to have a label which was not Finnish.

In an earlier interview you‘ve said that you take your music seriously but you don‘t have the ambition to save the world with it. But if you really had the chance to change something in our world, what would it be?

Iiro: We would depose Donald Trump (everybody‘s laughing). No, but seriously – peace for the world and getting rid of racism, allowing people to smoke weed and have sex with anyone they like (if it‘s ok with both of the partners) and by that I refer to gay rights and stuff like that. People should be able to do whatever they want and no one should be offended by it.

Would you agree that the aesthetics of this kind of music that you play is mainly built on a paradox? If you take, for instance, album covers or lyrics seriously, most of them are really disgusting and sickening but at the same time strangely artistically satisfying and appealing?

Would CUMBEAST ever dare to take up a challenge and write a ballad?

Iiro: It depends on what you mean by a ballad. If it includes clean vocals and singing about girls or shit like that, definitely no. But if it could be done in our style – brutal and maybe a bit slower, well… it‘s a possibility. Maybe you just gave us an idea! Everything‘s possible because we really don‘t want to put any limits on what we do. We just do what we feel up to and if something feels appropriate to this band then we will use it.

HUGE thanks to Iiro, Mikko and Roope for an extremely nice interview and Aki for the light! Lithuanian freaks will surely be ready for yet another analcondian attack! 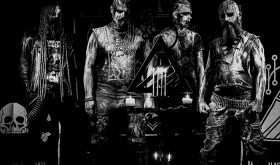 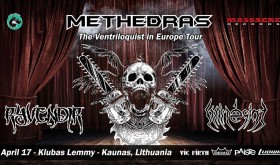 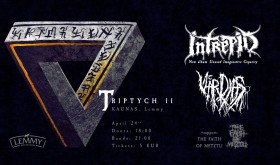 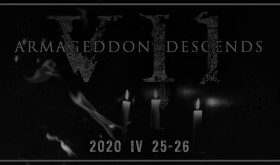 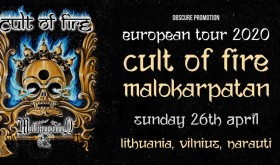