Several questions for the guitar player of GOREFEST Frank Harthoorn

The Dutch leaders of death metal scene GOREFEST are alive from 1989 when the band was founded by the vocalist and bass player Jan-Chris De Koeyer and guitar player Frank Harthoorn. After splitting up in 1998, the band resurrected in 2004 and lately recorded their reunion album called “La Muerte”. The six album is due via Nuclear Blast Records before the end of the year. 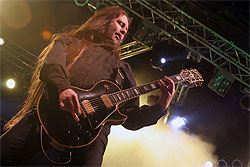 Linas: What could you tell about the GOREFEST new album “La Muerte”? A few words on what it is about, concept, etc.?

Frank: Well, we recorded it at Excess Studios in Rotterdam. We produced it ourselves, and Tue Madsen will be mixing it. Lyrically, it’s about Death, I guess. Death of the Self, Death of innocence, Corruption, that kind of thing. Hell on earth, basically.

Linas: Why was there a 6-year break in the biography of GF? What has changed?

Frank: We split up because we were more or less fed up with each other. 6 years later, we kind of started missing each other, so we decided to give it another go, hahaha.

Linas: What are the nearest plans of GF – festivals, tours, concerts? Albums? DVDs?

Frank: We’ve just completed our festival-run with Wacken and Rock The Nation in Turkey. Now we are waiting until the album’s out, and after that hopefully some touring will be done.

Linas: What about the hobbies of GF members?

Frank: Music and movies, that’s about it. Food and sex are nice as well.

Linas: Your favourite bands? Albums? What do you think about the new generation of metal bands? Any favourites? 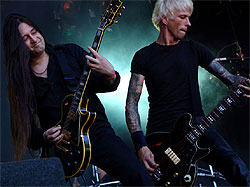 Linas: What do you know about Lithuania? Basketball? Beer?

Frank: Too little, I’m afraid. Hope to get over there with GOREFEST one day!

Linas: What would your wish for GF fans in our country?

Frank: Hope you’re all happy and well, and let the metal flow! 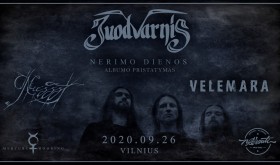 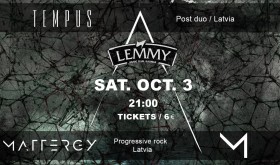